Authority Is Not a Bad Word

Let me guess. You can’t wait ’til your parents bug off and get out of your business. I felt the same way when I was your age.

But I didn’t realize then that this authority thing never ends:

Since that fateful day centuries ago when Adam and Eve decided God couldn’t tell them what to do, we’ve all been bucking authority.

Authority is as much a part of life as sunlight or toasted wholegrain bread. That’s because God has all authority (the right to control and command), and He’s the One who established human authorities:

There is no authority except from God, and those that exist have been instituted by God. Therefore whoever resists the authorities resists what God has appointed, and those who resist will incur judgment (Rom. 13:1–2).

Anyone else less than happy about this whole authority idea? Of course you are. Since that fateful day centuries ago when Adam and Eve decided God couldn’t tell them what to do, we’ve all been bucking authority. Including me.

They were thrilled for me to go, but they didn’t want me to travel by myself. This wasn’t easy to hear for a “big girl” like me who can take care of herself just fine, thank you very much.

I appealed, explaining that my hosts would pick me up at the airport, but my employers stuck to their guns.

It looked like I might not be able to go to Brazil. My hosts said they could only pay for an additional ticket if I could find another speaker.

I tried. No one could come.

Until one day I thought of a perfect fit. After several days of prayer, this speaker agreed to travel with me.

With God at the helm, authority is just another layer of His providence and protection.

And then, finally, it all made beautiful sense. God had worked through my authorities in order to send not only me, but another Spirit-filled speaker to Brazil. As a result, His kingdom work was at least doubled—maybe more.

And in the process, I was reminded of an important lesson: Authority is not something to be bucked; authority is not a bad word. With God at the helm, authority is just another layer of His providence and protection. In fact, He works out all His purposes through authorities.

How about you? Are you bucking authority, or do you trust God enough to submit to the authorities He has placed over you at this time in your life? How can you actively choose to submit to your authorities today?

Authority Is Not a Bad Word was originally posted on LiesYoungWomenBelieve.com.

Some of you are attracted to your crush for much deeper reasons than his dark hair and strong muscles. You love the way he loves God. Rock on! Still, I wonder if you’ve thought through this?

Now it’s your turn. How specifically is your crush godly, or God-like? And how does his godliness line up with Christ’s godliness?

Christ or Crush? (Super Godly) was originally posted on LiesYoungWomenBelieve.com. 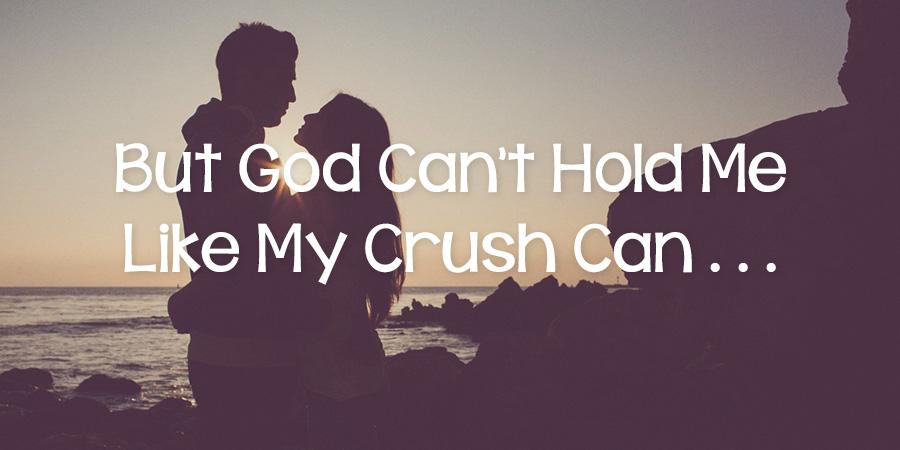 Apparently I’m not the only one who has wondered how God can satisfy when all I want is a pair of strong arms to hold me close. Here’s what Rebecca wrote me:

“The biggest thing I think my crush can give me that God can’t is his strong arms wrapped around me. Although my crush has yet to hold me in his arms, his physical closeness sends shivers throughout my body. I know that God is always there for me . . . but sometimes my feelings get the better of me, and all I want to do is be wrapped up in my crush’s arms and attention.”

“I think what always gets me is that God isn’t physically there like a guy is. He can’t wrap his arms around me. Sometimes I just want that.”

“I have often thought, I wish God could come down here and give me a big bear hug. Then I would really be in love with Him.”

But here’s the thing . . . He has come down! And while He was here, He picked up kids and cradled them in His arms. (You have to admit, that shows a tender heart—few guys walk around doing the same thing!)

I know He’s not physically here now. That’s the whole “we walk by faith and not by sight” deal. Like 1 Peter 1:8 says,

“Though you have not seen him, you love him. Though you do not now see him, you believe in him and rejoice with joy that is inexpressible and filled with glory.”

But one day soon, we will see Him. We will be with Him.

When Christ comes again to “marry” the Church, His Bride, He will likely hold us too. I don’t know this for sure, but here’s what 1 Corinthians 13:13 does say:

“Now we see in a mirror, but then, face to face. Now I know in part; then I shall know fully, even as I have been fully known.”

Now that is something to look forward to! Jesus Christ is not an idea; He is a Person. A Divine Person with arms and legs and beautiful probing eyes. He loves you. Enough to spread His arms wide in order to bleed so you might be healed. And if you have put your trust in His death and resurrection on your behalf, you will soon see and know Him fully.

If you have put your trust in Christ’s death and resurrection on your behalf, you will soon see and know Him fully.

So in the meantime, as you wait for Him, by all means, hug! No, not your crush. Hug your dad. Hug your mom. Hug your brothers and sisters. Hug your friends. Hug those old ladies at church.

And as you wait on your forever Bridegroom, watch out that you don’t make the same mistake God’s people made years ago, when they rejected God for a man they could see and touch. (You can read that story in 1 Samuel 8 and 12:19.)

Now I’d love to hear from you. Are you in danger of deciding God is not enough for you because He isn’t here to hug you right this second? Tell me about it (and more importantly, talk to Him about it!).

Christ or Crush? (His Muscles)

My boyfriend works out at the gym when he gets the chance, which I love. I’ve always thought strong arms were so attractive. Apparently, you agree with me!

But as strong as your crush is, and as strong as I think my boyfriend is, their muscles are nothing compared to Christ’s strength. Let me give you three examples.

Christ or Crush? (His Muscles) was originally posted on LiesYoungWomenBelieve.com.