How to Love Your Deaf Neighbor 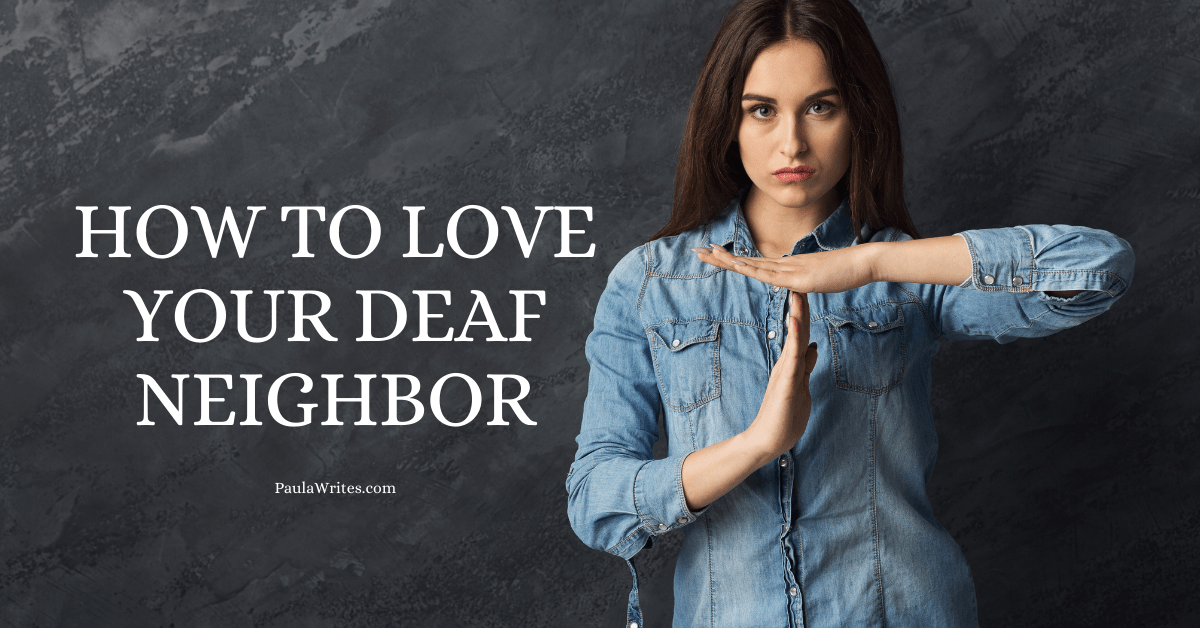 I noticed Michelle for several reasons. In addition to her beauty and penchant for bright colors, I’d never seen her at church before, and she sat alone in the front row. When I introduced myself, I learned why Michelle sat up front: She was Deaf. She also read lips. A few weeks later, I invited Michelle to pick blueberries with me. Would we be able to communicate? I wondered with trepidation as I picked her up. END_OF_DOCUMENT_TOKEN_TO_BE_REPLACED

Christian, Are Your Doors Locked?

Tonight, weather-permitting, a bunch of strangers will converge on our backyard for a cookout and a bonfire. We don’t know most of these people yet, but we hope to soon. They are fellow residents of Eastwood, a village in the city of Syracuse, New York. END_OF_DOCUMENT_TOKEN_TO_BE_REPLACED

Hospitality on a Budget

My husband and I took advantage of a rare moment of freedom (read: babysitting), and set out on our bikes. We cycled through upscale neighborhoods, pointing out our favorite homes and landscaping, until we spotted this strange-looking device by the side of the road. END_OF_DOCUMENT_TOKEN_TO_BE_REPLACED

Why One Woman Left the True Woman Conference

One woman, Patsy, left the True Woman Conference. Here’s why she didn’t stick around: END_OF_DOCUMENT_TOKEN_TO_BE_REPLACED

10 Tips for Interacting with an Atheist

In the past, I would’ve freaked at the idea of dialoguing with an atheist. But for the past month I’ve had the unexpected privilege of interacting with one. END_OF_DOCUMENT_TOKEN_TO_BE_REPLACED

The Gospel for Muslims

by Thabiti Anyabwile. It’s a thin book (yay for books that don’t overwhelm!) with two sections. The first section covers the basics of the gospel and how Muslims’ beliefs compare, and the second is filled with practical tips for how to share the gospel with Muslims (chapter titles like “Be Filled with the Spirit,” “Trust the Bible,” “Be Hospitable,” and more).

I didn’t realize until I picked up the book that Thabiti converted to Christianity as a sophomore in college. Get a copy for yourself to learn why he became convinced that Islam couldn’t be true and how God finally drew him to Himself. It’s intriguing!

Thanks to one of Thabiti’s practical suggestions, I’m going to be baking all week. I invited the woman in the hijab from across the street over for tea, and she said yes! Thabiti shares that only women have the opportunity to reach Muslim women for Christ (they can’t interact with men), and he suggests spoiling them like crazy when they come for tea. So I’m planning to do just that.

Log on to the giveaway widget for a chance to win a copy of The Gospel for Muslims.

Sharing the Gospel with Muslims is Easier Than You Think

Sharing the gospel with Muslims really wasn’t on my radar until I moved to New York to marry Trevor. Suddenly I had not just one Muslim neighbor, but two. (This is a big deal for a girl who grew up surrounded by cornfields!) END_OF_DOCUMENT_TOKEN_TO_BE_REPLACED

Have you seen the meme “rustle my jimmies”? It came into use in 2010 and expresses strong emotional angst toward someone else’s post on the Internet. As a blog manager for the past seven years, I’ve observed my share of “jimmy rustling” in the comments section—on this blog and on other blogs. Yes, it appears even Christians get their jimmies rustled from time to time. END_OF_DOCUMENT_TOKEN_TO_BE_REPLACED

How to Encourage Others Without Even Trying

I appreciated Elizabeth’s insight on last week’s post, Three Epic Reasons to Encourage Others. I asked, “Who do you know who could use a good dose of encouragement right about now?” And she responded, “There isn’t anyone who doesn’t need to be encouraged.” True. And here’s the thing: it doesn’t take much to become a continual encourager. END_OF_DOCUMENT_TOKEN_TO_BE_REPLACED

Thirty-three foster kids and six adopted children later, I joined Dan and Melissa Jarvis’ family for a few weeks. The stories I have learned since have boggled my mind. END_OF_DOCUMENT_TOKEN_TO_BE_REPLACED