4 Cautions to Christians When Speaking of Hell 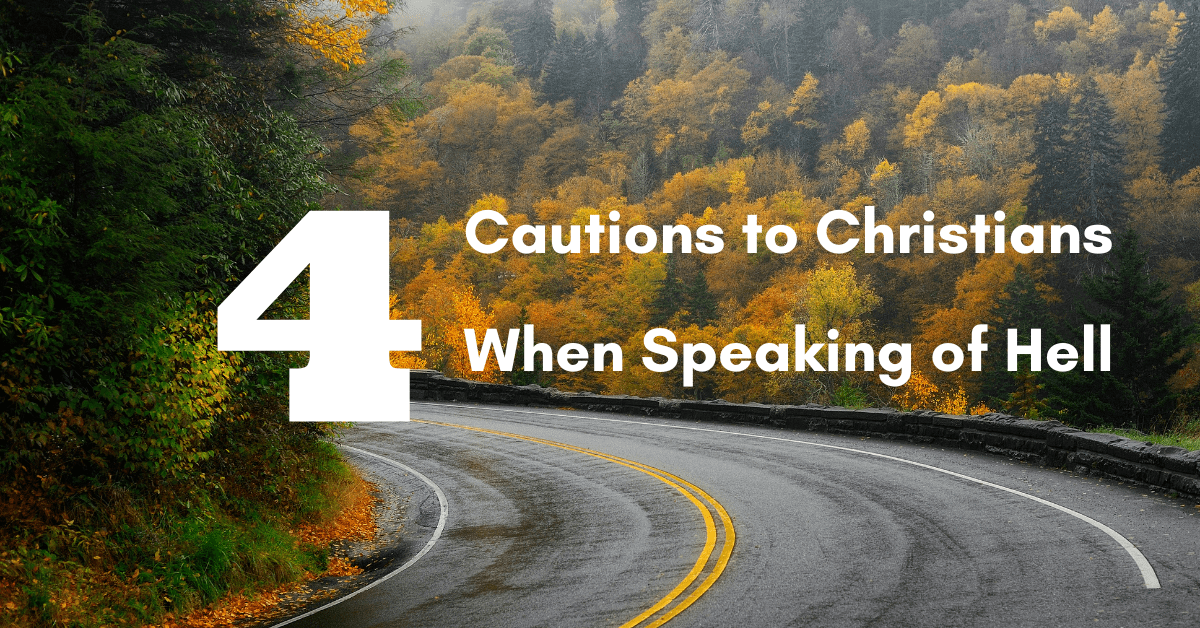 God’s Word overflows with warnings of judgment, Hell, and “the lake of fire.” As Bible-believing Christians, there’s no getting around its awful existence.

I write this post—not to debunk the doctrine of Hell—but to challenge the way you may think and speak of it. After spending hours listening to Christians, ex-evangelicals, and non-Christians share their thoughts about Hell, here are four cautions to Christians when speaking of Hell to those who don’t yet know God personally. 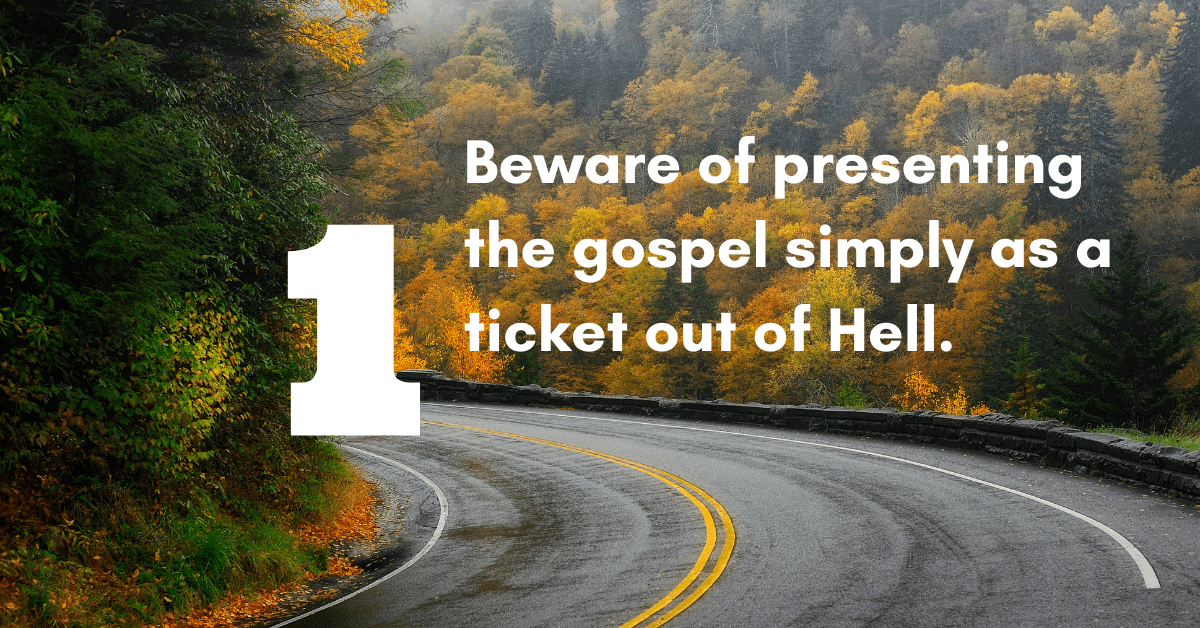 Salvation through Jesus is about exponentially more than simply securing a get-out-of-hell-free card. If we only present the gospel in this one-dimensional way, I fear others’ Christianity will look and sound like Tallulah’s, who said, “At this point, one of the only things holding me to my faith is the fear of hell.”

How heartbreaking. Salvation includes so much more than signing up for a forever destination vacation in heaven, which—by the way—feels as relevant to the average person as winning a wooden washboard.

When someone becomes a Christian,

2. Beware of speaking of Hell stridently. 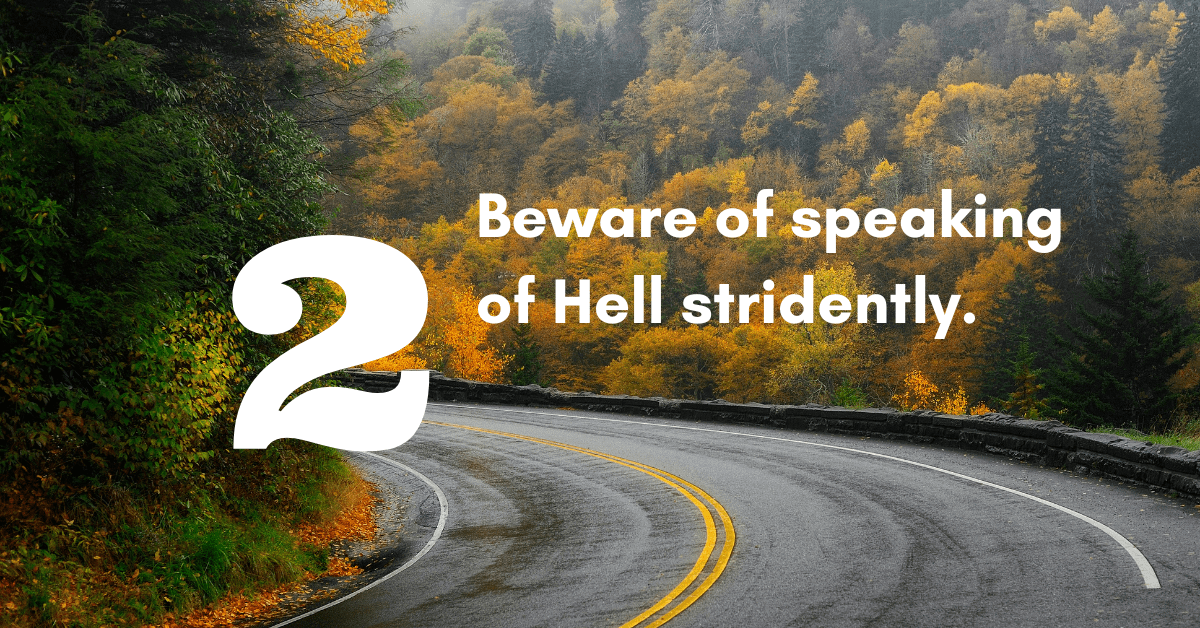 When Sean was asked if he believed Hell was real, he responded:

“Of course it’s real, it’s where I’m going! At least that’s what my Aunty told me when I was fourteen. I didn’t even quite realize I was gay yet, but she felt it was okay to tell her nephew he would burn in hell for eternity because she thought he was gay. So yeah, hell must be real, ’cause she was the first of DOZENS who’ve told me that throughout my forty-seven years of life.”

How disgusting that multiple people felt compelled to respond to Sean’s sexual orientation—first and foremost—with the threat of Hell. (I wonder, do these same people throw out warnings of Hell the minute they hear a heterosexual person complain or lie?)

All sin leads to death, but Jesus came into this world to save sinners. His heart yearns for them, “not wishing that any should perish, but that all should reach repentance” (2 Peter 3:9).

Those who identify as LGBTQ+ are—like all of us—valuable image-bearers of God. They should feel loved and accepted by Christians. May they say after spending time with us that we are like our Savior: “full of grace and truth” (John 1:15).

(Maybe you’d never dream of speaking of Hell stridently. But do you speak of it offhandedly? Without empathy? That, too, is problematic.)

What word describes how you speak of Hell? Stridently? Flippantly? Casually? Compassionately? 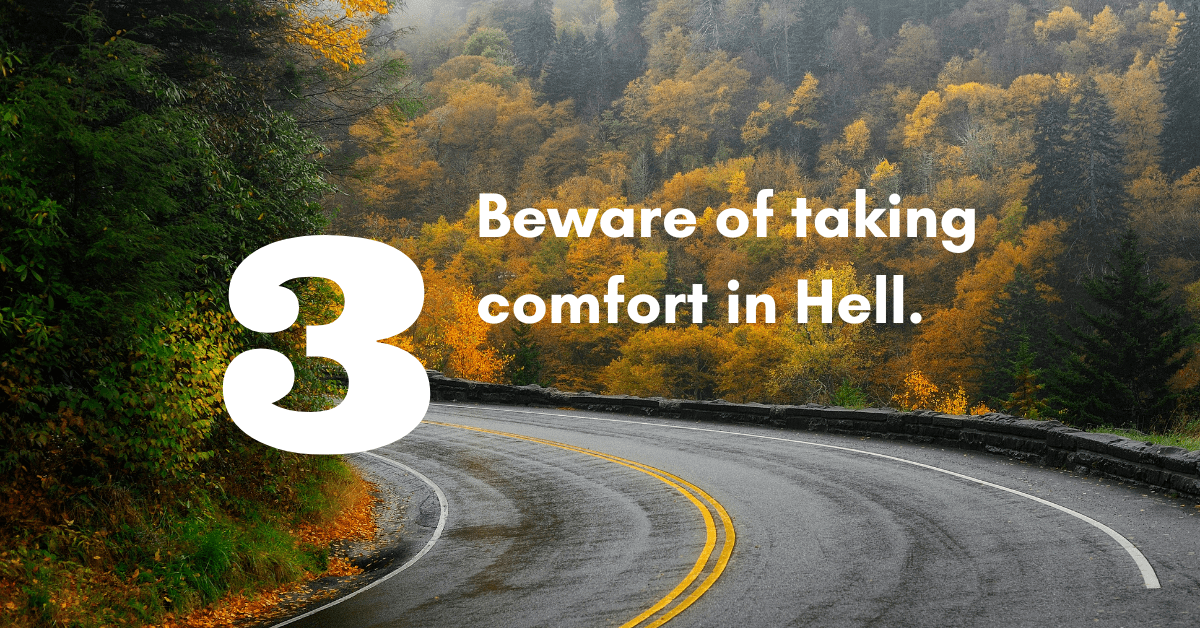 One Christian wrote of Hell,

“As I have heard more and more stories of evil in the world, hell is a comforting thought. So many people have committed atrocities and never got caught or held accountable. It is comforting to know that the great Judge who knows all things will give justice for those who never got justice on earth.”

There’s nothing wrong with rejoicing that God is a God of justice, but let’s steer clear of using this line of reasoning with unbelievers. I don’t think we’ll get far. As Taryn writes,

“I would never want people who have done extremely terrible things to me to suffer forever. If I have this empathy and love for them, how much greater must God’s love and empathy be toward them?”

A Christian’s rejoicing in God’s justice is also laced with lament. As Alison puts it,

“I’m so thankful that God will deal with sin fully and finally according to his holy wrath. Vengeance is his, not ours. I rejoice that God is just, and I lament the fate of the many who will experience hell.”

“The Lord Jesus Christ wept over Jerusalem, and you will have to weep over sinners if they are to be saved through you.”

May that be the fervent desire of our heart as well, pleading for the souls of those around us on bended knees rather than pointing accusing, wagging fingers in their faces.

What emotions do you feel when you think of Hell? 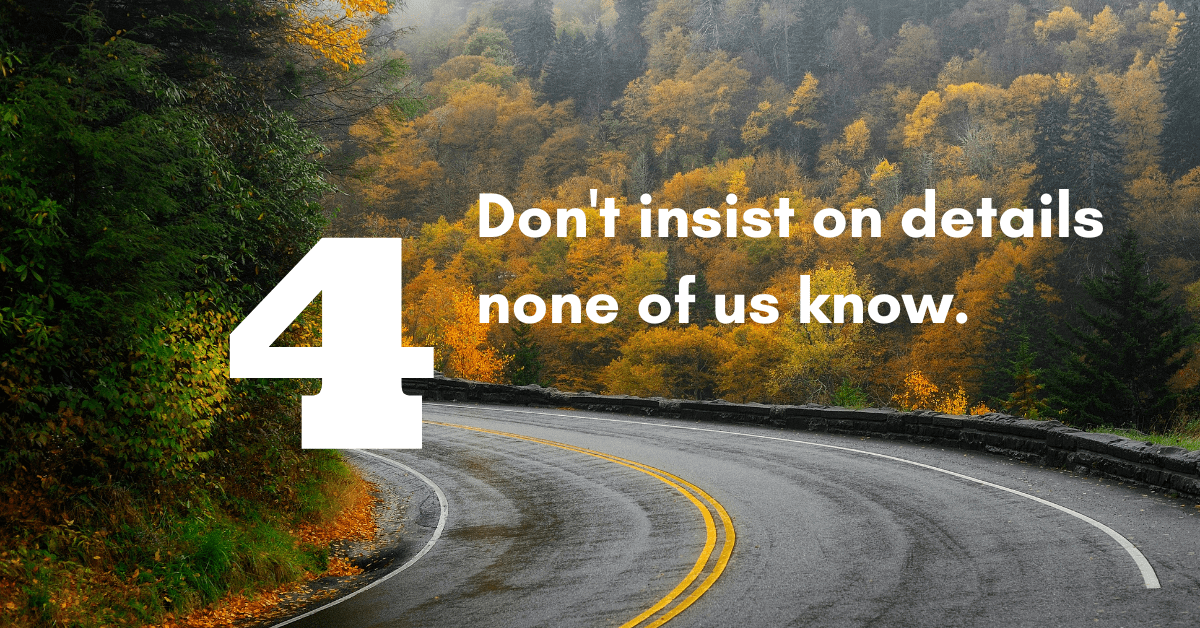 Mal recounted a time she spent the night at a friend’s house when she was in third or fourth grade:

“The mom sat us down for their nightly Bible study and explained to us how when the rapture comes, the good will ascend, and the rest will be left to complete chaos. Eternal fires would erupt, the oceans would be of blood, people would be screaming and in horrifying pain, but they would never die.

“I can’t even begin to tell you all how absolutely traumatized I was. It has lingered in my mind since that year. Even to this day, a lot of my fear of God comes from the fear of Hell. It has WEAKENED my faith for many years; only this year have I begun to rediscover my faith.”

Like this mom, you might think Hell is incredibly clear-cut in the Bible. But did you know there are differing views of it in Christendom? Even fellow Christians in your church probably do not think exactly as you do about Hell. While we believe Hell is real, we don’t know exactly what it will be like.

Yes, the Bible speaks of fire, but will these flames be real, or is this simply eschatological language? Is Hell a physical place of unending torture or more a state of separation from God?

May we humbly admit we don’t have all the answers rather than getting bent out of shape when someone doesn’t view Hell exactly as we do. And most of all, let’s link arms in sharing the glorious news of salvation in Jesus while there’s still time.

Are you willing to consider that you might not have all the answers about the afterlife? If that’s the case, how should this inform your conversations with unbelievers?

PS: Watch for my next post to explore some commonly believed myths about Hell—as well as what the Bible actually says about it.